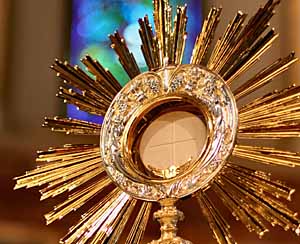 (Lk. 22:18-20) – And he took bread, and gave thanks, and brake it, and gave unto them, saying. This is my body which is given for you: this do in remembrance of me. Likewise also the cup after supper saying, This cup is the new testament in my blood, which is shed for you.

As many times as I have seen Christ in others, in works of others and in my own life and works, in paintings of Him and statues, I can say as beautiful as these spoons of grace from God are, noting in this world contains our Lord in His purest form as Him in the Blessed Sacrament of the Holy Eucharist.

You say and I say also, Christ is present in every soul on earth but not in His purity. So many times have I seen Him for a split second in so many souls. There is only one place in this world where you can find Him in such a way that the world is completely stripped away of all impurities and our iniquities and that is in the consecrated Eucharist in the Holy Catholic Mass.

Sunday while attended Mass early in the morning, He presented Himself in this way, and I seen Him. In His poverty and I accepted Him fully. As it was time to receive Him, I noticed one of the Eucharistic Ministers whom I have seen Christ in a few times in the past in a little shimmer of light. This man was presenting Him to me at Mass on Sunday. This particular person was used by our Lord in the past to present a message to me and I held him in a high regard because that moment in my life I had been struggling with many spiritual things. The Inner Voice of our Lord came over my thoughts in this way, asking me, who is it, the presenter of Me whom you seek, or Me in My fullness? As I was walking up to receive our Lord from this person, I blocked out his face and the experience of what I had see in him in the past, and accepted Our Lord ONLY. Making the choice to the question between the two that was asked of me and my answer was and will always be, My Lord, The King of Glory. Jesus Christ in His pure form in full poverty. Not my “Image” of Him, but Him.

The tag line on my blog reads, “Trying to paint a picture of Christ”. No matter how many images there are of Him in this world, and no matter how close they bring a soul to Him, His fullness is contained completely in the Bread of Life. His true face is there. He is there! 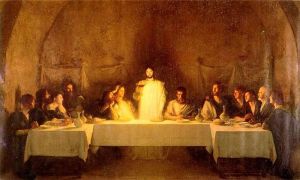