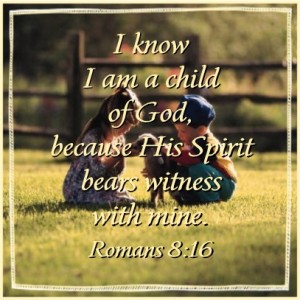 “Child of God”. What exactly does it mean to be a child of God? This is what it means to me….

When I was in grammar school, I had become friends with a girl who in many ways, became a good friend. Only today, can I truly appreciate this particular situation that had taken place on her birthday.

I was in many ways an introvert. Although I had some friends, I could only be comfortable having one good friend at a time. I always sought the deeper meaning to why I wasn’t enticed to the external world. There was a peace I had found in spending time alone, but a lot of turbulence in not being able to merge life and living, as EVERYONE my age was doing, with the inner peace and solitude I found comfort in. The reality was, I was struggling with what the world wanted me to be, rather then what God intended me to be.

Her birthday was coming and it was all everyone was talking about at school. There was this great party planned it was the talk of our school. EVERYONE was going. EVERYONE was going to be there. I got the invitation and when I got home, I hid it and never told my mom, but told my friend, I would be there. There was a fear that by attending this party, I would be leaving what I had come to know. Where I was comfortable. On a different occasion, she had invited me to go someplace with her and her brother and her dad. I wanted to go SO bad. She had a horse and I loved horses but hers was a race horse and he was going to be at a racetrack. When I asked my dad if I could go, he shook his head and told me what kind of a family takes children to a place like that. NO! Immediately followed. I was crushed. I had no idea what things could take place there, all I knew at that age was there was a horse and I wanted to see him. Its only now that I can see my dad was protecting me. Sheltering me from things, that might have been, I had no business to see at my young age. As innocent as it was in my mind. Its not that they were a bad family, they were not, its the place they were going was out of my dads reach. He couldn’t keep an eye on me to ENSURE I was going to be OK.

The day of her party came and I was playing outside. My mom came to me and said, your friend in on the phone wondering where you are! Today is her party and your not there! Why didn’t you tell me about this! I looked down in shame and said I didn’t want to go. My mom knew I really liked my friend. She had introduced me to a softball and I had joined a teem we played together on also. My mom pulled me inside and told me; you told her you were going, your going! She cleaned me up and drove me to the party and when it was over, brought me back home. During the party, all the kids had a great time! Including me! I might not have danced as much, but I enjoyed the fact everyone else was having fun!

Such is life. God the Father drives us here and picks us up when the party is over. All the while, knowing where we are at every second. While at the party, many things can happen and do. There are souls who want to go to other party’s, because the one we are all at isn’t fun enough and leave without asking “Dads” permission or telling “Him” where they are going. Thinking He will never know. We forget that when He drops us off at the party, we are not alone. He sends His “Body Guards” with us to keep an eye on us the entire time because He loves us. If we do something at the party before asking Him, and it gets us tangled in a big mess, He is there to free us and our Brother comes to bail us out. The key is not to wait until the mess is big but rather seek His permission before the mess could be made. If we get into a situation where we promise someone that we are going to be there for them, We are promising to God. God gives us “extra spending money”, everything you will need for the things at the party, meaning the gifts we need to ensure the decision we have made, and live within His boundaries, then this is “Dad” telling us, it is OK, but ask Me first.

I love you Dad.