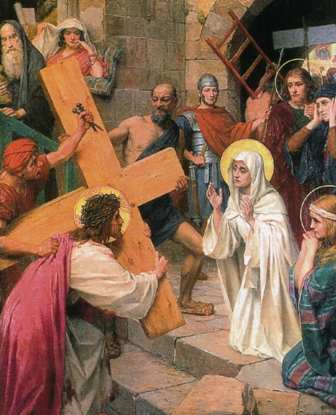 This afternoon, I had the pleasure of eating lunch in St. Threse Plaza, next to my church. My daughter Violet was able to attend Vacation Bible Study and after lunches were passed out to all children and younger siblings. She asked me if we could have a picnik. My younger daughter Chloe had been feeling much better and I said yes. We said our prayers and began to eat.

Children of all ages were playing around us and one little boy who looked just over a year old was playing with the older children. He was staggering a bit as he walked and I coudl tell, he had not been on his feet for very long. He was adorable! With that, an older child who had been running from another child, plowed directly into him, knocking him to the ground where his tiny little head bounced on the cement. Without even batting an eye, I ran to him. I picked up this little one and was overcome with so much love. I didn’t feel any anamosity to the children who knocked him down. I did not even see them. All I could see is this little child in pain and needed to help him. I held him in my arms and asked where his mommy was. She came over as I comforted him and I handed him back to her. Leaving him to her, knowing what love truly is. I felt myself completely detached from everything, including my own children sitting, watching the event take place, with the exception of ensureing this child be comforted.

In the time it took to see this playing out, and act on it, I was brought to The Road to Calvary at the exact moment of Mama Mary meeting our Lord for the first time. Running to Him with open arms. Wanting to holding the child Jesus in her arms, trying to comfort Him in agoney and then releasing Him again to complete what He was born to do. Seeing completely the love Mary had for her Son, our Lord. To share Him with all, knowing He did not belong to her alone. She could not keep him to herself. Moreso, not placing the balme on anyone, but understanding fully, it was what He needed to do, to ensure all humankind, could be picked up by Him and comforted in His love for all time.