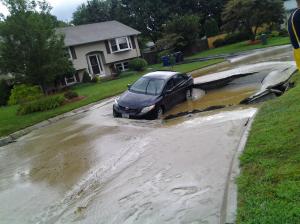 One of the biggest mistakes we can make on the road back home to our Lord, is to think for even a second, I was put here to “Protect” God. There is a huge difference between admonishing the sinner and protecting God. How often we ponder the Crucifixion of our Lord and think, I would have done something to stop that if I were there! We crucify our Lord over and over again, every time we sin. Just as the world does. The difference between the two is that the soul in love with our Lord understands He rose from the dead, and gave his life that we can be forgiven. It was God’s will. His forgiveness is always on the table, free for the taking like Dad’s car keys, but we must seek Him, and ask for it. “I absolve you of your sins” is the definitive yes. We know being His children, we we take His forgiveness and go into the world, its not to say we wont get scratches on His “car” or in worse cases, crash it through our sinfulness. We will. But He still allows us to take it. When we take it and we are not responsible, the damage comes quick. Sometimes before we even leave the driveway or get the key in the ignition. We must understand that His forgiveness came at a price and to be responsible for any “damage” that occurs after to this brand new car is our own fault. The worldly soul doesn’t ask but assumes its okay to take the car, takes it and the motor burns out because he didn’t realize the “car” needed more oil and a new filter. Prayer is the oil that fills our lamps. The new filter can be found in confession. If the filter is plugged with sin, nothing can get through to the rest of the motor.

God wants us to take His forgiveness, but to be careful, not to be afraid and never leave the car in fear it may become damaged, but rather to do what we need to accomplish the tasks He asked us to perform for Him.

When we make the mistake of thinking we can protect God, we are acting just as Simon Peter did in regards to our Lord and the will of God, that He should die for our sins and be raised on the third day. When Jesus predicts His death, “Peter took him aside and began to rebuke him. “Never, Lord!” he said. “This shall never happen to you! Jesus turned and said to Peter, “Get behind me, Satan! You are a stumbling block to me; you do not have in mind the concerns of God, but merely human concerns.” Parking the car, hands on the steering wheel, sitting inside not doing a thing God asked of us.

When we think we are to protect God, we are denying the very fact He is God and does not need our protection. From anything or anyone. His will be done, no matter how painful we know it will be for us and the one committing the sin, in order that His plans are solidified. Not ours. Later on we see where St. Peter denied Christ three times. In the world we live, while we are in the “Spirit” we see the crimes (sins) being committed against God and far to often believe we need to protect God, when the realization is, we need just not to deny Him and admonish the sinner. Allowing God to do the job that needs to be done. Be it in any way He wills. Our job is to present the TRUTH at every turn. When we choose not to, we are committing the sin of omission and are just as guilty as the one we are watching fall into the pit of sin. “Omission” is the failure to do something one can and ought to do. If this happens advertently and freely a sin is committed. Some times, when we think we are protecting God, we tend to do to much and start blaming and pointing fingers rather then simply correcting the sinner with truth thinking we are doing good. This is the “Protecting” of God that I am speaking about. The truth is, when placed in this position we are actually to be protecting ourselves against doing this. “Then Jesus said to his disciples, “Whoever wants to be my disciple must deny themselves and take up their cross and follow me.” Deny yourself, not God. God still loves the sinner as much as He loves you and His will is to bring both of us home. Not one over the other. We are called to protect God’s (children) and the seeds we are sowing in them, He will make grow. If any damage is done to the “car” on the trip, tell Him right away. He can fix that.