I met Joyce while singing Gregorian Chant on Monday nights and on occasion would share a Liturgy of the Hours song book. She managed to check one out of our public library and when it was time to return it, would automatically re-check it out. Neith of us could afford to purchase it. The night before Joyce passed on to eternal life, she was at a choir party with some members of our Sunday choir and one of our Priests. Somehow, the topic of death came up and Joyce began to tell everyone what to do in case she were to pass on. All were listening and laughing at the colorful laid out plans for burial and the Catholic Mass. The next morning, Joyce was gone. She passed on to eternal life by natural causes in her sleep after spending 70 plus years in exile.

When I received the news of her passing, I was very happy. I don’t mean to sound calloused, but it was a joyful day. Joyce was a soul so full of life and to see her pass on without so much as one sick day or in any amount of suffering was actually, to me, something to hope for in my passing. A friend and I prayed for her soul and then began to comment, laughingly, on how she cheated! She wasn’t sick, she didn’t suffer and the night before was laughing about it. She had a beautiful death.

On now to just a week ago. Last week I walked into the sacristy and located on one of the tables were two beautiful prints. One being the Sacred Heart of Jesus and the other that matched it being the Immaculate Heart of Mary with a not attached to them. The note was from my good friend Joyce’s daughter, explaining that Joyce had asked her to donate the two prints to the church, to be placed in the Adoration Chapel. I looked them over and knew exactly where to place them. I asked our Pastor if it was ok to place them in there and after receiving his okay, contacted the maintenance man immediately to get them hung up. Where I had wanted to place them, was going to be difficult. Beind the drywall was a concrete buttress wall. The chances of getting them up on that wall and having them stay there was not good. God willing, it was done, leaving the maintenance man quite amazed that he was able to place them there. 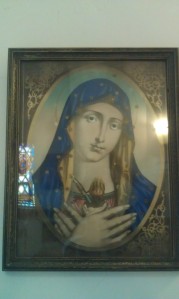 There was something very special about the prints. More so then being a gift from a friend who had passed on. I had never seen prints like this before and felt a strangely strong but joyful feeling about them. That was last week. The week passed by and work overtook me. Every time I would spend time with our Lord in Adoration, I couldn’t help but look at them and wonder. Two days ago, it hit me. Mama Mary and our Lord are covering their hearts. It’s odd that their hearts would be covered in prints featuring the Sacred Hearts. I posted an update on facebook asking friends if they knew the meaning of the covered hearts. As soon as I hit send, in my heart, I heard our Lord say to me, “Why didn’t you just ask me?” So I did, in prayer. Our Lord said to me, “I got you covered.”. Immediately Matthew 6:21 followed. “For where your treasure is, there your heart will be also.”