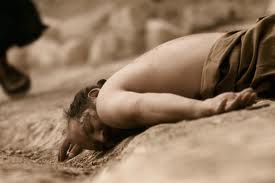 A week ago, I was contacted by a man with questions about Adoration of the Blessed Sacrament. I was taken back at his call because I had not been the Captain of the Adoration Society for at least 8 months. You see, he held on to a very old Church bulletin with my contact information inside, in regards to sitting with our Lord.

As the call came, I was going to give him the churches contact information and send him on his way. He began to ask questions, and I knew in my heart he was crying for help. As we talked he opened up, and the Holy Spirit began to do His work. The man on the other end of the phone, began to tell me what he had been through in the past few years, and ever time he said a word, I could see myself. In all he was saying, I had been there. You see, the man, who I will call David, was emptying his heart out to me, in regards to how he wanted to come back home to the Catholic Faith.

Since my ties to the parish he was inquiring about had been in the past, I gave him the contact information to do what he needed to do. We talked for over an hour and he made it very clear, he was screaming for Our Lord to help him. We cried together in discussing the faith and the love our Lord has for us, and the rocky road we had been on. I was overcome with a love that no one could understand. I could see the pain this man was in and knew the help he needed as I had screamed out for the same help many years ago. When I was lost, unknowingly on the road “down from Jerusalem to Jericho.”

A few days later, he called me back and in the midst of our conversation, he had revealed to me that no one was contacting him for the numbers I had given to him. He then began to reveal many struggles he was enduring even in his own home for simply praying. He began to pray more, and his sisters began chastising him. “What are you praying for?” Why do you want to go to Church?” “Whats wrong with you?” “Are you crazy?”. Simply because he was turning away from sin, and to our Lord. This poor man was being “beaten” and “robbed” of his faith in his own family.

I had a few concerns in speaking to him as I was now Married and in all honesty, I didn’t think it was a good idea to carry on a relationship, EVEN one on one Spiritually, with someone I had not known, nor who had known my husband. In listening to David, he had revealed to me that he had a cousin who was a Catholic Priest but had not talked to him in some time. I advised David that he NEEDED a good strong Spiritual adviser to help him out and since no one was getting back to him, it would be a fantastic idea to contact his cousin the Priest. David agreed, and begged me to join him in Exposition of the Blessed Sacrament on Friday, as he was afraid to go alone, and so I agreed to join him.

Not sure of David would call his Priest Cousin, I tracked him down myself. I had given Father the background and told him that I would LOVE to continue to help David, but didn’t think it would be good, under my circumstances. He had revealed to me that David did in fact contact him but he wanted to talk to me first and was glad he did. He assured me that David would have adequate care now in his spiritual needs. I said “God bless you Father”, and hung up the phone, knowing I had brought this beaten man to the Doctor that can nurse him back to health.