This is what ZERO light from man looks like. The Church of the Good Shepherd on New Zealand’s South Island is surrounded by starlight, thanks in part to night-sky preservation efforts 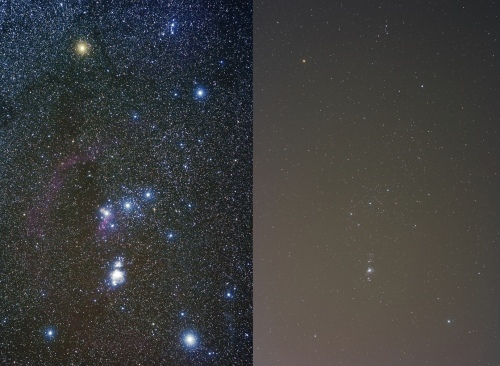 This is what light pollution prevents you from seeing: The constellation Orion, imaged at left from dark skies, and at right from within the Provo/Orem, Utah metropolitan area.

In the photo above, I can imagine our souls, dim with sin looking the same way…

“Its tail swept a third of the stars out of the sky and flung them to the earth. The dragon stood in front of the woman who was about to give birth, so that it might devour her child the moment he was born.
” Revelation 12:4 Comes to mind…

A Facebook Friend posted something very interesting this morning on Light Pollution. She said she had never heard of it and I found her comments rather sad. You see, when I was very little, my dad would break out his telescope and we would look at the stars. It was a time that was beautiful. He used to tell me all the time about light pollution. He would tell me of a sky FULL of stars where a telescope was not needed because the beauty was breathtaking as it was.

As cities grew and crime became a greater issue, more man-made lights became needed. All that was needed was one crime and blaming it on darkness (lack of light) rather than actual (darkness of evil). What causes a man to commit crimes? Certainly not the fact that it is dark outside, but rather there is a darkness within.

Such is evil in this world in the ways it seeks to trick the soul into believing it needs what it is providing much more than what God has created for it, to see God in His creation, to adore Him and give Him the glory since the beginning. This is where evil separates man from God. When you can no longer see or hear Him, man forgets about his need for Him and life becomes “dark”. Slowly removing the Light of God, and replacing Him with mans own “creation”…

We had a MAJOR power outage in 2011. No power was available from San Diego to AZ. We were celebrating Rosaries for Peace and had a precession of Our Lady of Fatima planned just before the power went out. We continued on without electric. The moon was full and beautiful in the sunset sky as the procession began.

It was SPECTACULAR! Inside the Church everything was candlelit throughout the entire Mass. When I arrived home after, driving through town without any lights anywhere, I was amazed to see how BEAUTIFUL the sky was. How peaceful the night was. People were out and enjoying the evening.

I was able to see things I never dreamt of before. It was the most beautiful night I had ever had in my life. Granted, it was spent with our Lord in one of the most spectacular ways it could have been in this world. I am very happy without “light pollution”. As I am just as happy right now with it.

Revelation 22:5 There will be no more night. They will not need the light of a lamp or the light of the sun, for the Lord God will give them light. And they will reign for ever and ever.

After understanding my FB Friend had no clue what I was talking about, and telling me good luck with banning the sale of light bulbs, I had to clarafy what I am actually speaking about to her:

The price has already been paid to let the light shine from within. But the world doesn’t want that. It wants to suck the faithful into the “black hole” of its “manufactured light”. All you have to do is “plug in” to what our Lord is telling you. The reason manufactured light is used today is for “security”. LOL Do you see what I am talking about now? Trying to stop the sale of light bulbs would do nothing nor is that even where my thoughts are. My heart knows, man is so infatuated with false security that they do not understand Gods security. We live in an imperfect world, I can not change that. I do however understand it.

“We can find such reasons in the order and beauty of creation itself, which speaks of its Creator; in the longing for the infinite present in the human heart, which finds satisfaction in God alone; and in faith, which illumines and transforms our lives through our daily union with the Lord. By the witness of our living faith, may we lead others to know and love the God who reveals himself in Christ.” – Pope Benedict XVI

Pope Francis: anchor your heart in hope, not false security 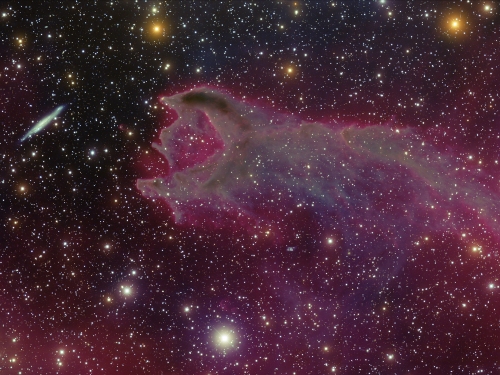 The flower-like image of this star-forming region in Earth’s southern skies was imaged using a 64-megapixel Mosaic imaging camera on the National Science Foundation’s Victor M. Blanco telescope at Cerro Tololo Inter-American Observatory.
Cometary globules are isolated, relatively small clouds of gas and dust within the Milky Way. This example, called CG4, is about 1,300 light years from Earth. Its head is some 1.5 light-years in diameter, and its tail is about eight light-years long. The dusty cloud contains enough material to make several Sun-sized stars. CG4 is located in the constellation of Puppis.

The head of the nebula is opaque, but glows because it is illuminated by light from nearby hot stars. Their energy is gradually destroying the dusty head of the globule, sweeping away the tiny particles which scatter the starlight. This particular globule shows a faint red glow from electrically charged hydrogen, and it seems about to devour an edge-on spiral galaxy (ESO 257-19) in the upper left. In reality, this galaxy is more than a hundred million light-years further away, far beyond CG4. The image from the Blanco 4-meter telescope was taken in four filters, three of which are for blue, green and near-infrared light. The fourth is designed to isolate a specific color of red, known as hydrogen-alpha, which is produced by warm hydrogen gas.