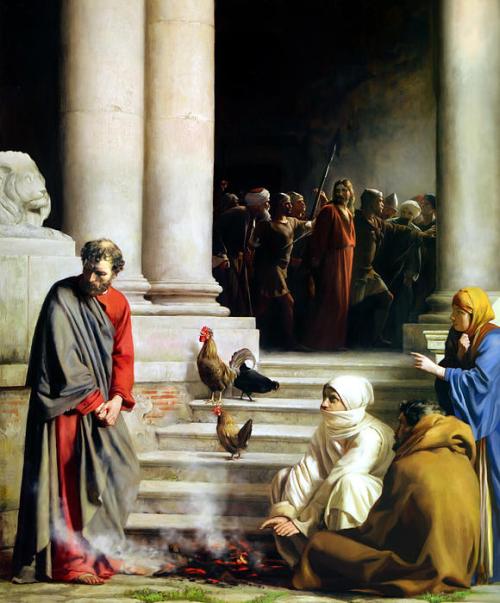 66 While Peter was below in the courtyard, one of the high priest’s maids came along.

67 Seeing Peter warming himself, she looked intently at him and said, “You too were with the Nazarene, Jesus.”

68 But he denied it saying, “I neither know nor understand what you are talking about.” So he went out into the outer court. [Then the cock crowed.]

69 The maid saw him and began again to say to the bystanders, “This man is one of them.”

70 Once again he denied it. A little later the bystanders said to Peter once more, “Surely you are one of them; for you too are a Galilean.”

71 He began to curse and to swear, “I do not know this man about whom you are talking.”

72 And immediately a cock crowed a second time. Then Peter remembered the word that Jesus had said to him, “Before the cock crows twice you will deny me three times.” He broke down and wept.