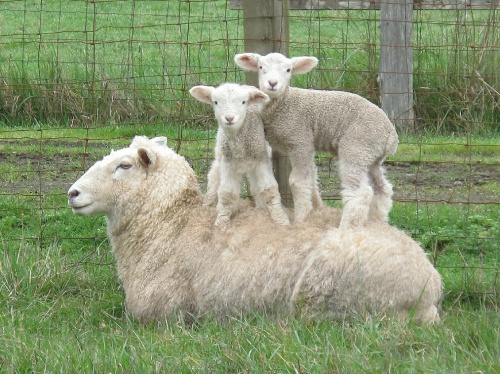 My family and I walked into Holy Mass today and two little girls from my daughters class walked up to my daughter and asked her if she found a box of tissues. We were set back a bit and my daughter said no. We went to sit in the pew and like every week, my daughters argued over who was going to sit where and my Violet grudgingly slid deeper down the pew instead of grabbing the end of the pew. She began crying and became angry that her sister took HER SEAT. She sits there. It belonged to her and her alone!

As the tears ran down her cheeks from the raging anger that was eating her up about her sister, I reminded her about the two girls that asked her if she found a box of tissues and tried to calm her down and have her think about where we were, and prompted her to think of how it was our Lord was speaking to her. The two girls asking if she found the box of tissues, her getting upset about nothing and crying her eyes out, not having a tissue to wipe them away. Nothing was registering. She couldn’t comprehend what I was telling her. She didn’t want to listen. Her sister took HER seat! She began to tell me about how her sister sat in HER seat LAST WEEK TOO! To which I reminded her that we sat in the middle of the pew last week and everyone was someplace else.

The tears finally ended, focus was regained and Holy Mass began. As I received our Lord today in Holy Communion, He made me cry. It was my turn. I had been contemplating all the things He had been showing me, all the worry I had for others and myself and the state of the world as it is. How He had lead me back to Him and all the beautiful and frighting experiences I have seen and lived through with Him leading the way. I was crying like a baby as He reminded me, “My sheep hear my voice”. Everything that has caused me to worry about others and why no one was listening to me all became the focal point as to why. Why is because if I can here Him, they will too. In His time. When He calls His sheep, they will hear Him. Not me, but Him. A question was then asked of my heart. Is it for pride that I do this, or for Love? I didn’t have to answer as the answer radiated in my heart. That little box of lost tissues made seance again.

Mass had ended and we went for coffee and donuts in the back of the hall. One of the church groups was selling plants. “I am the vine. You are the branches”. My daughters bought two little plants. Our Lord made it perfectly known to me, He already gave me two more little “sprouts” on this “branch” to take care of on His Vine.

As we sat eating and relaxing, I had noticed that a chain on a gate that had been there for a very long time, was no longer there. Although the gate was closed, all I had to do was lean on it as it was no longer locked. I knew it was significant at the time, but it just wasn’t registering. I am only now reminded of last week and The Good Shepherd. “So Jesus said again, “Amen, amen, I say to you, I am the gate for the sheep.”

All glory, praise and honor to our Lord Jesus Christ. Today and forever. Amen