Pondering “Laudato Si” and Pope Francis on Twitter in the past few hours:

“I invite all to pause to think about the challenges we face regarding care for our common home. ‪#‎LaudatoSi‬. We need a new dialogue about how we are shaping the future of our planet. #LaudatoSi. There is an intimate relationship between the poor and the fragility of the planet. #LaudatoSi. There is a need to seek other ways of understanding the economy and progress. #LaudatoSi. There is a value proper to each creature. The throwaway culture of today calls for a new lifestyle. #LaudatoSi. “To commit a crime against the natural world is a sin against ourselves and a sin against God.” (Patriarch Bartholomew). The climate is a common good, belonging to all and meant for all. Climate change represents one of the principal challenges facing humanity in our day. #LaudatoSi. The earth, our home, is beginning to look more and more like an immense pile of filth.These problems are closely linked to a throwaway culture. One particularly serious problem is the quality of water available to the poor. #LaudatoSi. The human environment and the natural environment deteriorate together. The deterioration of the environment and of society affect the most vulnerable people on the planet. We have to hear both the cry of the earth and the cry of the poor. #LaudatoSi. To blame population growth, and not an extreme consumerism on the part of some, is one way of refusing to face the issues. A true “ecological debt” exists, particularly between the global north and south. Developed countries ought to help pay this debt by limiting their consumption of nonrenewable energy. There is no room for the globalization of indifference. #LaudatoSi. Economic interests easily end up trumping the common good. The alliance between economy and technology ends up sidelining anything unrelated to its immediate interests. Whatever is fragile, like the environment, is defenceless before the interests of a deified market. We need only to take a frank look at the facts to see that our common home is falling into serious disrepair. #LaudatoSi. The present world system is certainly unsustainable from a number of points of view. #LaudatoSi. Each community has the duty to protect the earth and to ensure its fruitfulness for coming generations. “Creation” has a broader meaning than “nature”; it has to do with God’s loving plan. #LaudatoSi. Every creature is the object of the Father’s tenderness, who gives it its place in the world. A fragile world challenges us to devise intelligent ways of directing, developing and limiting our power. At times more zeal is shown in protecting other species than in defending the equal dignity of human beings. We should be particularly indignant at the enormous inequalities in our midst. #LaudatoSi. We continue to tolerate some considering themselves more worthy than others. Earth is essentially a shared inheritance, whose fruits are meant to benefit everyone. #LaudatoSi. For believers, this becomes a question of fidelity to the Creator. Never has humanity had such power over itself, yet nothing ensures that it will be used wisely. Each age tends to have only a meagre awareness of its own limitations. It is possible that we don’t grasp the gravity of the challenges before us. #LaudatoSi. We are learning all too slowly the lessons of environmental deterioration. #LaudatoSi. By itself the market cannot guarantee integral human development and social inclusion. Scientific and technological progress cannot be equated with the progress of humanity and history. There is an urgent need for us to move forward in a bold cultural revolution. #LaudatoSi. Christian thought sees human beings as possessing a particular dignity above other creatures. The culture of relativism drives one person to take advantage of another, to treat others as mere objects. It is contrary to human dignity to cause animals to suffer or die needlessly. #LaudatoSi. We need an integrated approach to combating poverty and protecting nature. For indigenous communities, land is not a commodity, but a gift from God, a sacred space. Having a home has much to do with a sense of personal dignity and the growth of families. #LaudatoSi. The world we have received also belongs to who will follow us. #LaudatoSi. What kind of world do we want to leave to those who come after us, to children who are now growing up? What is at stake is our own dignity. Leaving an inhabitable planet to future generations is, first and foremost, up to us.” 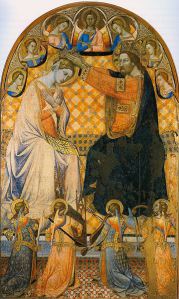 Most who will read this will either not understand or call me crazy. I forgive you. Some with a greater gift then I, I hope will read more into it then I can. This vision is so etched on my soul in great detail, it is the only thing on my mind. It has consumed me. After seeing this vision last night, and still being in this world, it has managed to separate two worlds completely. The world in which we live and the world in which we hope to live. I can only see this world we are in as dying and know I am still apart of it but the Kingdom of Heaven is my home and where I belong. There is zero doubt, this vision was a gift of our Holy Mother as it came to me while praying the Glorious Mysteries of the Holy Rosary last…