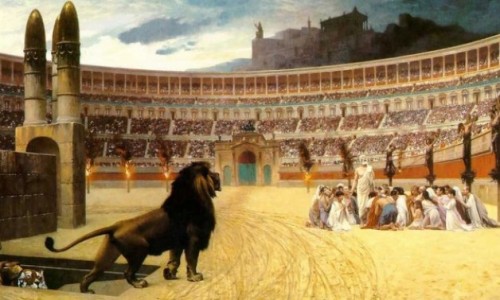 For all who are worried about what is taking place in the world, The persecution of Catholics and Coptic’s in Egypt and everywhere in this world. Take comfort. They can loot the churches, burn them down, destroy all “visible” aspects of the Christian and Catholic faith they want in Egypt and elsewhere. NO ONE can destroy the faith in the Heart of every one of God’s faithful. PERIOD! The “Body” is the Temple of our Lord and He shall prevail.

“Yet a time is coming and has now come when the true worshipers will worship the Father in the Spirit and in truth, for they are the kind of worshipers the Father seeks. John 4:23”

Physical man-made buildings come & go, SOULS go on FOREVER~! Christ Jesus, is our King and He is alive and well in our hearts, no matter what they do to the “buildings” we worship Him in.

I offer you to look at Servant of God, Cardinal Van Thuan.

“After South Vietnam was conquered by the North Vietnamese communists in 1975, Archbishop Thuan – who had just been appointed Coadjutor Archbishop of Saigon – like hundreds of thousands of his countrymen, was imprisoned. He served a total of 13 years in prison, for nine years of which he was in solitary confinement at Vinh Phu prison in Hanoi, former capital of North Vietnam. The pope said the man celebrated Mass every day in prison, “with three drops of wine and a drop of water in his hand. This was his altar. This was his cathedral.”

“During thirteen years in jail, in a situation of seemingly utter hopelessness, the fact that he could listen and speak to God became for him an increasing power of hope, which enabled him, after his release, to become for people all over the world a witness to hope—to that great hope which does not wane even in the nights of solitude.” 2007 encyclical, Spe Salvi, Benedict XVI referred to Thuận’s Prayers of Hope

Servant of God, Cardinal Van Thuan, pray for us

“I have told you these things, so that in me you may have peace. In this world you will have trouble. But take heart! I have overcome the world.”