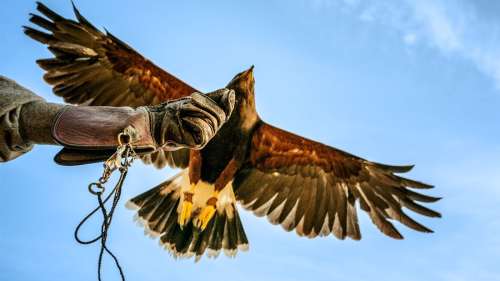 Turning and turning in the widening gyre
The falcon cannot hear the falconer;
Things fall apart; the centre cannot hold;
Mere anarchy is loosed upon the world,
The blood-dimmed tide is loosed, and everywhere
The ceremony of innocence is drowned;
The best lack all conviction, while the worst
Are full of passionate intensity.

Surely some revelation is at hand;
Surely the Second Coming is at hand.
The Second Coming! Hardly are those words out
When a vast image out of Spiritus Mundi
Troubles my sight: somewhere in sands of the desert
A shape with lion body and the head of a man,
A gaze blank and pitiless as the sun,
Is moving its slow thighs, while all about it
Reel shadows of the indignant desert birds.
The darkness drops again; but now I know
That twenty centuries of stony sleep
Were vexed to nightmare by a rocking cradle,
And what rough beast, its hour come round at last,
Slouches towards Bethlehem to be born?

If you find yourself still asking, but what does that mean? Look no further than the post

An Explanation for the Bewildered

“Let me be blunt: you’ve been played for idiots. Idios, in the original Greek, means an independent agent, belonging to oneself. That is how I mean it. The designer of the Sexual Revolution believed you’d go so far to sacrifice your own families for sexual autonomy (most of you aren’t even married yet, but you’ve severed yourselves from what your ancestors handed down, a process of cutting begun by your grandfathers).”

The “Smoking Gun” Of The War On Women

The first shot fired by the war on women started when she was conceived out of the Bonds of Holy Marriage because Mom & Dad didn’t know what love was..

The second shot came when she was refused spiritual guidance to Abba Father after birth because it’s a “Parental Right” to not believe in God.

The third shot on the war on women came when she entered into school and they taught her a child in the womb of a pregnant woman was just a mass of tissue.

The forth shot fired in the war on women came when she was taught sex outside of the Bonds Of Holy Marriage was just fine, “Do what Makes You Feel Good”.

The fifth shot fired in the war on women came when she objectified herself thinking it would bring her “love” because the “sex” education she received.

The sixth shot fired in the war on women was fired from her own hands when she killed her own daughter she was taught was just a mass of tissue because she believed in doing what made her feel good.

There is a “War on Women”. Woman are pulling the trigger on themselves. Put the gun down. Your killing yourselves. Women are at war with themselves and until women understand what LOVE is, the war rages on.

Please don’t make me pay for it by paying for your abortions and contraception because I know what Love is. And it isn’t that nor is it “healthcare”. But that is a subject for another day.