The Angel Who Strengthened Our Lord 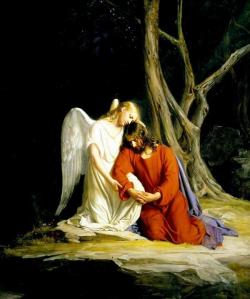 “An angel from heaven appeared to him and strengthened him.” Luke 22:43

In the Gosple account of Mark 14 32:34, we hear “They went to a place called Gethsemane, and Jesus said to his disciples, “Sit here while I pray.” He took Peter, James and John along with him, and he began to be deeply distressed and troubled. “My soul is overwhelmed with sorrow to the point of death,” he said to them. “Stay here and keep watch.”. Father Jerome Murphy-O’Connor is stating that Jesus had a brief nervous breakdown. As much as the faithful would say NO WAY to such a report, after all He is God and how could our Lord have experienced such a thing, I have to agree with Father Jerome. We have to understand Jesus Christ has two natures which cannot be separated, human nature as well as divine nature. The balance of which is crucial. I have to take into account that our Lord, being Creator, to see ANY soul lost in sin, through His human nature must be the most painful experience. To lose one soul that He created, to see just one soul chose not to love Him in return has to be devastating to His human nature. Imagine then to see that compounded by all the souls in eternity in such a way, who choose not to be with Him? Not to mention the persecutions and sufferings of all Gods children through all time? Could you imagine watching just one of your children starve to death through lack of receiving our Lord?

I often see the Angel who strengthened our Lord as all the prayers for all mankind to come. The way in which our Lord was strengthened was through humility. The Angel must have brought our Lord the news that many were calling to Him for help, who had not yet been born. In a moment when He was distraught at seeing His thirst for those He had been preaching to, to understand Him, he was strengthened by the prayers of the future. Meaning, our prayers and faith in Him not only TODAY but through all time after His rising from the dead, because of His suffering then, through humility, pulled Him out of His moment of distress.

How often do we look to our future with Him, especially while suffering and then it sinks in, our suffering is not long in this world because we know we can rest in Him for all eternity? That is where the basis of my strength comes from. In knowing that no matter where I am, when I join my suffering with His, when I place my full faith in Him, my suffering becomes nothing and His peace, joy and comfort becomes everything.