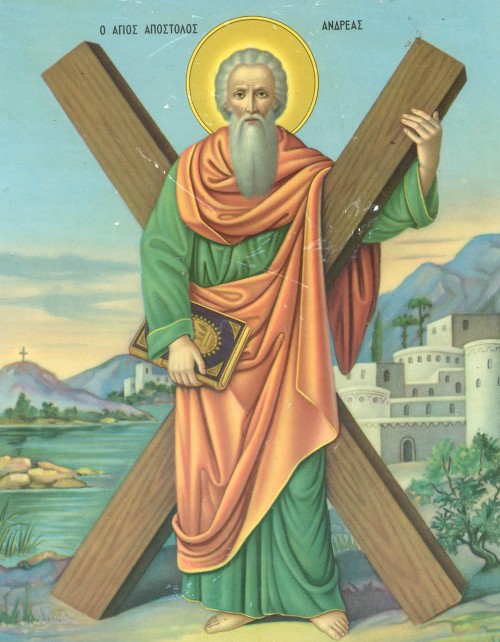 Generation X – what a wonderful Saint to take for our generation. May we lead others, our Brothers and Sisters to our Lord, to do much greater things then we, to give glory to God.

Then Jesus said to his disciples, “Whoever wants to be my disciple must deny themselves and take up their cross and follow me. Matthew 16:24

St. Andrew, pray for us that our generation is full of souls who answer the call as you did. To lead others to the fullness of our Lord as you did. Without any fear of persecution, to give the glory to God. Amen

Andrew, like his brother Simon Peter, was a fisherman. He became a disciple of the great St. John the Baptist, but when John pointed to Jesus and said, “Behold the Lamb of God!” Andrew understood that Jesus was greater. At once he left John to follow the Divine Master. Jesus knew that Andrew was walking behind him, and turning back, he asked, “what do you seek?” When Andrew answered that he would like to know where Jesus lived, Our Lord replied, “Come and see.” Andrew had been only a little time with Jesus when he realized that this was truly the Messiah.

From then on, he chose to follow Jesus. Andrew was thus the first disciple of Christ. Next, Andrew brought his brother Simon (St. Peter) to Jesus and Jesus received him, too, as His disciple. At first the two brothers continued to carry on their fishing trade and family affairs, but later, the Lord called them to stay with Him all the time. He promised to make them fishers of men, and this time, they left their nets for good. It is believed that after Our Lord ascended into Heaven, St. Andrew went to Greece to preach the gospel. He is said to have been put to death on a cross, to which he was tied, not nailed. He lived two days in that state of suffering, still preaching to the people who gathered around their beloved Apostle. Two countries have chosen St. Andrew as their patron – Russia and Scotland.

Above taken from Catholic OnLine

“…The Twelve called together the community of the disciples and said, ‘It is not right for us to neglect the word of God to serve at table. Brothers, select from among you seven reputable men, filled with the Spirit and wisdom, whom we shall appoint to this task, whereas we shall devote ourselves to prayer and to the ministry of the word’” (Acts of the Apostles 6:2–4).