Baptism Of The Lord 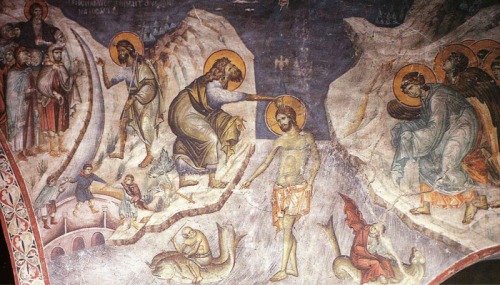 The baptism of Christ

Jesus rises from the waters; the world rises with him. The heavens like Paradise with its flaming sword, closed by Adam for himself and his descendants, are rent open. The Spirit comes to him as to an equal, bearing witness to his Godhead. A voice bears witness to him from heaven, his place of origin. The Spirit descends in bodily form like the dove that so long ago announced the ending of the flood and so gives honor to the body that is one with God.

Today let us do honor to Christ’s baptism and celebrate this feast in holiness. Be cleansed entirely and continue to be cleansed. Nothing gives such pleasure to God as the conversion and salvation of men, for whom his every word and every revelation exist. He wants you to become a living force for all mankind, lights shining in the world. You are to be radiant lights as you stand beside Christ, the great light, bathed in the glory of him who is the light of heaven. You are to enjoy more and more the pure and dazzling light of the Trinity, as now you have received—though not in its fullness—a ray of its splendor, proceeding from the one God, in Christ Jesus our Lord, to whom be glory and power for ever and ever. Amen.

Tagged as Baptism Of The Lord, Catholic, John The Baptist, Peg Pondering Again

Of Loneliness And Peace

“When Jesus heard what had happened, he withdrew by boat privately to a solitary place. Hearing of this, the crowds followed him on foot from the towns.” Matthew Ch.14:13

In all of my searching, I would love to say with my heart, I am lonely, but I can’t with a straight face. I carry to much hope with it, and know if our Lord wants to make known what I am experiencing, He will in His time. Everywhere the soul goes in this world, be it alone, or in the presence of others, our Lord has been there, and is there still in the holy Spirit. Loneliness is something only our Lord has truly felt. When we sinners are under attack of this empty feeling, our Lord is present and one only needs to call on Him to understand this as fact. By calling on Him in this state, loneliness becomes mist that dissipates as quickly as it comes on. The more we look to others to help us overcome it, the more lonely we become as other sinners can never truly understand where your soul is at its present time. When we turn to our Lord in this crisis, He comforts us and makes it known to us to look to other activities and not to dwell on our own feelings but to disregard them and bring light and peace to others instead, who can not yet understand its self pity and not Him turning away from us.

“Even though I walk through the valley of the shadow of death, I will fear no evil, for you are with me; your rod and your staff, they comfort me.” Psalm 23:4

Throughout our Lords life here and even in His death, He was alone with the Holy Trinity. So many times He preached to His apostles and to thousands and yet, not one soul could comprehend exactly what He was saying in its fullness until after His death and resurrection. I believe the only soul present who could comprehend this during His life, was John the Baptist. The Loneliness our Lord felt at hearing of his death, had to be so heavy on His soul. The only one on earth, in exile with our Lord, had been taken out and the connection via the spirit, was gone until our Lords death, when He was able to release him from the same bonds of death.

I ponder a lot of my time on His loneliness. On so many not able to understand Him. He was surrounded but alone. No one could comfort Him as He knew the extent of His mission here and only the strength of Abba Father, could carry Him through. The cries from souls in the future, enslaved in sin and misery, reaching out to Him, he could hear, but others around Him, couldn’t grasp the magnitude of His mission.

The loneliness we feel here, can never be the same as His. Although we have some understanding of His, ours should always be joined with His, so we focus only on His and ours becomes the nothing it truly is. The loneliness I can speak of now, is not true loneliness but rather a separation from the things I used to hold dear, and the realization of the spiritual things in this life, that carry a soul through to eternity. When our Lord allows me to see them for what they are, its no longer loneliness, but His mercy and grace I can see. True Peace!

Feast Of The Visitation

When I think of our Holy Mother Mary, setting out alone on the journey to her cousin Elizabeth’s house, to help her in her time of need, I am awe struck at the Blessed Virgins own humility. Elizabeth’s home is about eighty miles or four or five days travel. Not only was the trip long and treacherous, but she herself was expecting. Setting out on a journey to help Elizabeth deliver John the Baptist, she would need supply’s not only for the journey to her home, but also for the time spent with her blessed cousin.

As I am praying the Rosary, I often ponder the “Unseen Army of God” that accompanied her on her journey. What she ate and how she kept warm and how tiring the trip must have been for her seeing as she was carrying with her the most precious cargo known to man. She never worried on the trip as her own pregnancy kept her spirits high and she knew God was with her. For she had been told. “Hail Mary full of grace, the LORD is with thee”.

Upon arriving at Elizabeth’s, she was greeted with jubilation and the sentiment was returned! Even after a grueling four to five day trip on a pack animal, with no water for bathing, but what she had packed or what God had given her on the road for this trip. The trip back home, our Holy Mother was three months further along in her pregnancy with Our Lord and that trip was just as hard if not harder due to the uncomfortable situations. But she did it anyway! Through her humility we can see how she loved not only her cousin, but God and all of mankind.

Mary set out at that time and went as quickly as she could to a town in the hill country of Judah. She went into Zechariah’s house and greeted Elizabeth. Now as soon as Elizabeth heard Mary’s greeting, the child leapt in her womb and Elizabeth was filled with the Holy Spirit. She gave a loud cry and said, ‘Of all women you are the most blessed, and blessed is the fruit of your womb. Why should I be honoured with a visit from the mother of my Lord? For the moment your greeting reached my ears, the child in my womb leapt for joy. Yes, blessed is she who believed that the promise made her by the Lord would be fulfilled.’
And Mary said:
‘My soul proclaims the greatness of the Lord
and my spirit exults in God my saviour;
because he has looked upon his lowly handmaid.
Yes, from this day forward all generations will call me blessed,
for the Almighty has done great things for me.
Holy is his name,
and his mercy reaches from age to age for those who fear him.
He has shown the power of his arm,
he has routed the proud of heart.
He has pulled down princes from their thrones and exalted the lowly.
The hungry he has filled with good things, the rich sent empty away.
He has come to the help of Israel his servant, mindful of his mercy
– according to the promise he made to our ancestors –
of his mercy to Abraham and to his descendants for ever.’

Mary stayed with Elizabeth about three months and then went back home.