Today, the tomb is empty. Do not stay within it, nor with what remains in the cold and darkness. Do not linger in the dust of mortal sin and misery.  Leave the tomb of emptiness and live life in Christ our Lord and Redeemer, “behold, now is the accepted time; behold, now is the day of salvation.” Rise above from what is below. Be converted. Be holy.

He is not here; He has risen, just as He said!

The Bridegroom is awake and shall never sleep again.

“Our Lord spent 30 years of His life obeying, three years teaching, three hours redeeming! But how did He redeem? Suppose a golden chalice is stolen from an altar and beaten into a large ash tray. Before that gold can be returned to the altar, it must be thrown into a fire, where the dross is burned away; then the chalice must be recast, and finally blessed and restored to its holy use. Sinful man is like that chalice which was delivered over to profane uses. He lost his Godlike resemblance and his high destiny as a child of God. So our blessed Lord took unto Himself a human nature, making it stand for all of us, plunged it into the fires of Calvary to have the dross of sin burned and purged away. Then, by rising from the dead, He became the new head of the new humanity, according to which we are all to be patterned. The cross reveals that unless there is a Good Friday in our lives, there will never be an Easter Sunday. Unless there is a crown of thorns, there will never be the halo of light. Unless there is the scourged body, there will never be a glorified one. Death to the lower self is the condition of resurrection to the higher self. The world says to us, as it said to Him on the cross: ‘Come down, and we will believe!’ But if He came down, He never would have saved us. It is human to come down; it is divine to hang there. A broken heart, O Saviour of the world, is love’s best cradle! Smite my own, as Moses did the rock, that Thy love may enter in!” – Venerable Archbishop Fulton Sheen (The Fifteen Mysteries)

A blessed and glorious Easter to all.

May our Lord Jesus Christ, roll away the stones from our hearts and those of the entire world this Easter and replace them with His Flesh and Blood. Sacred Heart of Jesus, I place all my faith, trust and hope in You through the Immaculate Heart of our Holy Mother Mary. Amen

Risen – More Than A Movie

Its more than a movie. Its reality.

I had been discerning whether or not to go see the movie Risen. In all honesty, through a serious conversion of heart, we live it so there is no need to go see it. Last night, I had to opportunity to do just that.

Yesterday was a rare day in which I was able to attend Holy Mass at 5:30 PM, followed by Stations of the Cross. My children had attended the school Mass earlier that day along with the School Stations of the Cross. I had not been feeling well for the past few days and rather than attend with them, I decided to attend later tonight. My husband had been asking me if I was going to go see the movie “Risen” for the past few days and I had told him that I wanted to but I wanted him to say lets go see this movie.  I’m tired of being alone in our family, with our faith. Its not that I am lonely at all, but faith in our Lord was meant to be shared. Its hard when no one wants what you have to share.  Before leaving for Holy Mass last night, I asked everyone in my home, once more, “Does anyone want to come with me?”. My 9 year old Chloe said yes.

I attended Holy Mass followed by Stations in deep prayer and contemplation. It was beautiful. Mission San Diego was packed with souls worshiping our Lord. I became lost in Him as I pondered my nothingness and Him being my everything. It was a quiet drive back to my house after, as I was going to pick up my daughter. I contemplated on how peaceful and content it is to be with Him. I also thought about how it was going to be a late night as Friday is my night that I spend in Exposition with our Lord in the Blessed Sacrament also.

The movie was playing not far from my home at 7:50PM so after receiving our Lord, we could attend the movie. A late showing indeed, especially since I was bringing my daughter with me. Jumping ahead, we purchased our tickets, walked in to the theater and sat down. There was only a few other souls in the theater when we got there, but as the time passed before the movie began, more souls came in to watch the movie.

My Chloe cried as the reality of our crucified Lord began to ring home too her and I held her in my arms for the beginning of the movie and in all honesty, I am grateful she fell asleep quickly before all the other things took place in the beginning. I did appreciate the the fact that the makers of the movie did not try to pass our Lord off as just a sex symbol.

The movie ended. The souls in the theater clapped and I woke up my Chloe and got her up to leave. As we got up I noticed two men leaving who looked like the “Iconic” version of our Lord with long hair and body size and smiled to myself. I tried to keep up with them to get a look at their faces and His gentle reminder struck me. “Why Do You Look For The Living Among The Dead?”  That voice in my heart touched me and reminded me NEVER to chase after what I thought may be Him but to come to Him.  Our Lord was waiting for me in Exposition of the Blessed Sacrament.

As we arrived at home, I got my children ready for bed and off to praying the Rosary. I left again and was off to spend time with our Lord. As I walked into the Chapel which held our Lord there was only one other soul sitting with Him. There were 50 or so chairs set up and only two taken. I hung my head, and began to pray.

Do Not Be Afraid

“Then Jesus said to them, ‘Do not be afraid; go and tell my brothers that they must leave for Galilee; they will see me there.”

Ever ponder what it must have been like to SEE our LORD risen with the women and the apostles? Notice how it always takes them a few moments to pick up on “Who” they are seeing? The TRUE followers, the LOVES know their LORD. He opens their eyes to see Him because the EYES are the gateway to the SOUL. They know Him and He knows them. You can see it in the eyes. This is how I am able to “See” Him today. Its possessing a sense unlike any other. But it is not just a sensation that they can see Him. He is truly there.

I just returned from this BEAUTIFUL Easter Monday Mass. A better way to put what I had stated above is in this way:

Every time our LORD fell on the road to Calvary, He fell in LOVE.

The way His “Sheep” know Him is like taking a page from “The Princess and the Pea”. She could not sleep, because something as small as a pea, distracted her. She didn’t know what it was, but knew it was there to keep her awake.

Thank you LORD Jesus Christ, for all the “flowers”

My Place Of Refuge 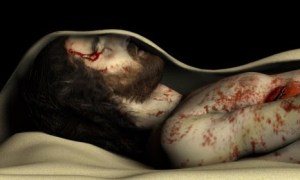 “Yahweh is my rock and my fortress, my deliverer is my God. I take refuge in him, my rock, my shield, my saving strength, my stronghold, my place of refuge” Psalms – Chapter 18 2

I no longer exist. The “Me” I used to be, is dead. I can only live through Christ. Everything I do is for our Lord. One Love, one sacrifice, one Glory all His. The pains I experience throughout my life are now nothing. His sacrifice is everything. He is my all. He is my Lord Jesus Christ.

My soul is so entangled with the True Vine, there is no escape from the love I have been consumed by. He chokes out all evil and the soul becomes captivated to only Him. All the love I can give is trumped by His love. Through His love for each soul, a new universe is created for each. When this happens, the explosion of the senses is overwhelming that no words exist to describe it. The interior of my being is all consumed by Him. The solitude on the outside can only be what our Lord also experienced in the garden of Gethsemane, and through His life as man. Knowing full, our existence here in physical body is terminal for now but our soul is His for eternity, to be united to His becoming one body. The beauty and fullness is one that I can only shout from the rooftops and hope the world opens up to Him and tosses away the physical and holds on tight to the true spiritual nature of Our King.

I wait and work in this world, in this body for Him. Every time you empty yourself and hand him all the LOVE you can find, He returns with ten times more to you that can not be matched. It is not based on just “Believing” but rather FACT He is King of Glory. My place of refuge is in my RISEN LORD.

I apologize but I can not hold back today, the LOVE I have for my LORD.

“I called to Yahweh in my anguish, I cried for help to my God; from his Temple he heard my voice, my cry came to his ears.”

Our Lords message today is, I LOVE YOU. The same message He has been trying to tell us all, forever. 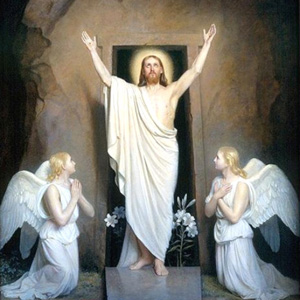